My laptop is lying temporarily abandoned sixty-some KMs to the left of me. But there’s work to do. So. Day one. This is a record and a portrait and a bit of fiction and a rambling stream of consciousness typed via bluetooth onto the tiny screen of my phone.

Andre said: This company takes risks, with intelligence, and thought, and sensitivity – but we should never apologize. (I suddenly thought about the cult of politeness that has lived for so long in so much of our theatre, and how much I rage against that.)

Early on, Aviva said something like: If they pay close enough attention to what I’m doing, they’ll solve the riddle.

I told Carlos what I wanted his character to wear, and he said: This guy isn’t a mob boss. But he’s not a cabby either. Don’t tell me what he wears yet. The clothes are part of the process of discovering who this guy is. I told him I thought the guy’s father could be Jesus.

At one point Ryan said: Maybe the play starts with Zeppo’s father.

Liza reminded us that the play gives us so much room to find strength and agency for its female characters – and reminded us to trust that. Later, when we argued the scenes into one of many (many) possible chronologies, she said: The only thing that’s important is that I know my own chronology.

(THIS EXCITES ME LIKE CRAZY. A chronology that works for each character is all we can aim for here. Good. That makes sense to me. Time, as physicists keep telling me in books and received knowledge and PBS YouTube videos, is relative. And no one observer has the right to claim their time is correct, or universal. I like that. I like what that might do to the way we play these scenes.)

Deb said: This is the second scene – for me.

When we read the play, Joelysa’s hypnotic score pulsed beneath us. Beneath the words, the thoughts, the inner lives of these people. A strange serpent winding through the empty spaces of Pomona, moving so slowly, ever present, ever watching. A ghost in a window, her lips opening and closing as if to speak. A warning half heard.

We laughed. We took some pictures.

At the end, Nick handed out Rubik’s Cubes. 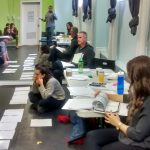 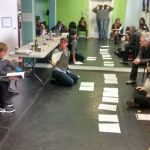 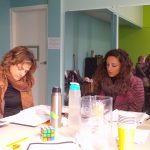 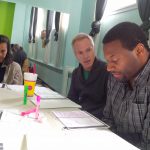 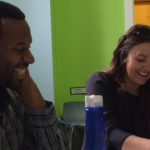 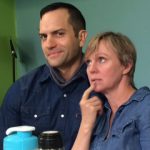 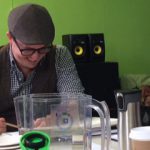 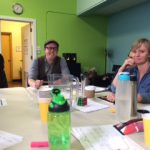 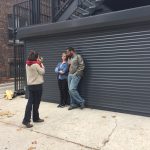